The national flag of Ukraine has two equally sized horizontal bands of blue and yellow. The combination of blue and yellow as a symbol of Ukrainian lands comes from the flag of the Kingdom of Galicia–Volhynia used in the 12th century. As a national flag, the blue and yellow bicolour has been officially used since the 1848 Spring of Nations, when it was hoisted over the Lviv Rathaus. It was officially adopted as a state flag for the first time in 1918 by the short-lived West Ukrainian People’s Republic and subsequently used by the Ukrainian People’s Republic. When Ukraine was part of the Soviet Union, the flag was outlawed and, before 1949, there was no official state flag until the adoption of the red-azure flag of the Ukrainian SSR. The blue and yellow flag was provisionally adopted for official ceremonies in September 1991 following Ukrainian independence, before finally officially being restored on 28 January 1992 by the parliament of Ukraine.

Remember Ukraine on your prayers. 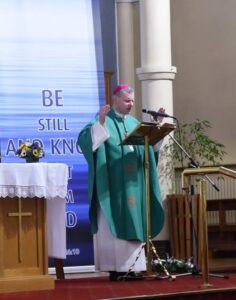